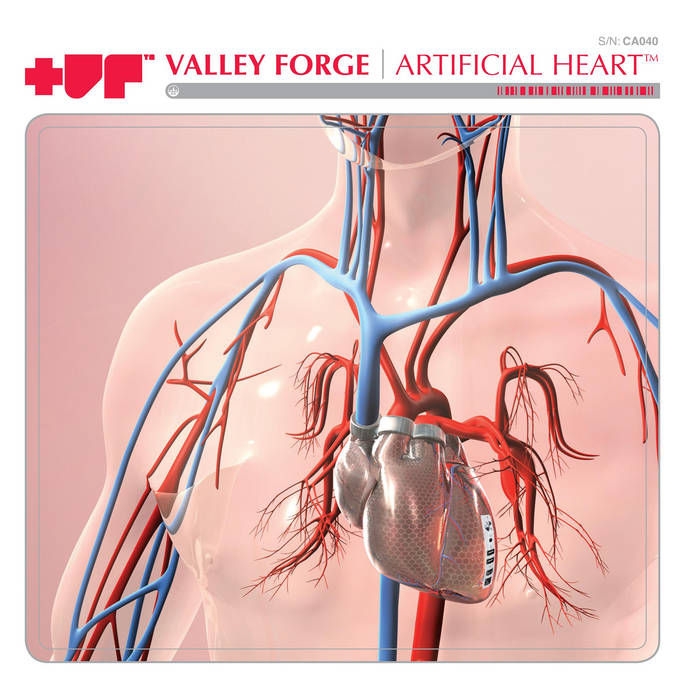 Artificial Heart (CA040) is an impeccably crafted reinterpretation, and genre-bending mix, of classic electro-pop influences, spanning rich, cinematic synthscapes to intimate techno-pop. On Artificial Heart, Valley Forge has created a masterclass in electronic production that pays homage to past masters while creating something original and epic.

01: POWER-UP
Starting things off like a "concept" album, Track 01 aims to generate the sense that the 'Artificial Heart' is being powered up, ready to infiltrate your system!

02: MACHINE-BUILT RHYTHM
I just wanted to do something very mechanical to kick the CD off…. something very machine-generated with precision beats and interwoven arpeggios and sequences all with little to no "human" feel. It's a definite homage to the late 80's/early 90s sound of the Australian Volition record label.

03: NE10
'Ne10' is the symbol on the periodical table of elements for Neon. When I was putting this track together, I kept visualising a neon-riddled city in the rain, but seen upside-down and reflected in a dirty puddle of water.

04: MUSCLE AND GRIT
VF does electro-dub. The original version of this track submitted for the 'In Version' compilation was somewhat different to the one that appears here. I beefed-up the darker elements and added more "muscle" and more "grit" with 8-bit crushed bass nuances and some additional crackle in the drum sounds and balanced it with a new middle section featuring a Prophet 5 that lightens the tone and counterpoints the dub feel when the two sections are overlaid towards the end of the track.

05: FOLLOW SUIT
'So Im Jo's frontman, Glen Cassidy provided the basic guts of the song, little more than a multi-tracked vocal/guitar piece about feeling locked in to one's destiny with no hope of becoming anything other than yet another featureless corporate clone. I layered more and more electronics over it, while attempting to retain the soul and alternative feel of the originally conveyed sonic moodboard. The final result is really nice, but quite unusual.

06: UNFURL
Originally conceived as a vocal track, 'Unfurl' loosely evolved from the Indonesian 'Wayang' shadow puppet theatre, only with characters of my own invention and a story featuring a giant golden idol that was to be protected from a horde of bandits - the leader of which was a demigod with huge-virus-laden wings… Weird. You can still hear the Indonesian influences [chanting/gamelan/anklung] and other instrumentation in the track but there's not a great deal of it left.

07: I WANT US TO MERGE
I wanted to do something very small and tightly controlled that recalled the music of Kraftwerk and with the idea of taking something very biologically intimate like sex and making it coldly digital and removed from the world of human senses. The track kept getting bigger in the same way that a cell divides and the end result is both crisply electronic yet, oddly wet sounding and awash in ethereal elements that make you feel like a new lifeform has indeed grown from the odd pairing of two ordinary organic beings becoming one incredible synthetic one.

08: STONERICH
For some reason, while putting this track together, I kept seeing Thor's cave, a famous landmark in Staffordshire, England. In the rain. As we push in, ever closer, to the mouth of the cave, the track builds and if it were ever to have a video clip that would have to be it. We can only imagine the horrors contained within! I worked very hard to retain a set of harmonics in the track that I kept hearing and I deliberately pushed those harmonics both at the mixing stage and during mastering so that the resulting track sounded really rich and full but the mix is never crowded. Both the Korg Mono/Poly and the PolySix got a good workout on this track - It's my homage to both Tangerine dream and Boards of Canada.

09: SEA OF SIMULATION
Upshifting gears here, we have a track that appeared in many different guises over the years the album has been in production - from superslow to just plain nuts. This version represents a shift towards glossy electro-groove in a very-much-inspired-by-TRON way. But this track was created waaaay before Disney thought about turning TRON into a franchise. I've always been fascinated with the miniature landscapes of printed circuit boards, imagining what manner of beings inhabited these tiny hi-tech worlds. Amongst the names given to the 47 individual track beds that make up this song are gems such as "Electrosquelch", "Nutcase Synth", "Weirdvox", and "LickMyBass". See if you can guess which one is which.

10: PAYLOAD
An apt name for a big track. This two-note funk[?] thing that riffs on James Brown, Mike Oldfield and Jean Michel Jarre and changes key every 8 bars just wouldn't go away. It got into my head and kept getting bigger and bigger and more layered - to the point of containing throat-singing and a dulcimer! It's a favourite of mine to play live as it just keeps growing and it likes being played LOUD.

11: WAYFARING STRANGER [Featuring Kamahl]
I'd known Kamahl for many years but had never considered collaborating musically until four years ago. I asked him to think of the saddest song he could recall from his vast repertoire of numbers amassed over a lifelong career as an entertainer. I stumbled upon an old version of 'Wayfaring Stranger' by Danny Darrow - someone I'd never heard of but something about that track's simplicity and emotional gutpunch just drew me to it. I asked Kamahl if he knew it, and luckily he did. Anyway - I turned up at his house with a laptop and a mike and he proceeded to record the vocals, no clicktrack, no piano for pitch - just freeform. We did a few takes and I got him to do some wailing and backing vocal snippets and then we parted ways for several years. During those years I slowly built the track, dropping Kamahl's bits and pieces in where I thought they should go, constructing a swampy, gothic-deep-south from within which those snippets of brilliance might shine. The end result is part Massive Attack, part Depeche Mode, part Vangelis but all emotion. I consider it the Magnum Opus of the album.

12: FLATLINE
The album's coda and the cyclical element that takes us back to the starting track by way of a synchronised beeping - intended to mimic a heartbeat/monitor and flatlining patient. The track was co-written by Amos Wong of the Japanese electronic ambient act Marway. It's reminiscent of lots of influences, most notably Depeche Mode, Recoil and Ryuichi Sakamoto.

Featuring interviews with the mighty Hiatus Kaiyote and genre-busting L'Rain.